Following the death of Mrs Egerton Smith a couple of years ago, 'Glentworth', was bought by developers last year. The house, built around 1917 by Marvens the Galleywood builder, has been the home of Mr & Mrs Egerton Smith for over forty five years. Charles Smith was an engineer and used to make prototypes for patent purposes working from an office and workshop in his home. It is said that he designed a simple car for use by demobilised servicemen after the war in 1945 but the project was not taken up by manufacturers. On his death, Mrs Smith sold part of the land next to the house to Countryside Properties who put up two detached homes, numbers 17 and 19.

When Glentworth was demolished, the site was bought by Jenny Moody Properties who put up four detached homes. Local concern over the fate of the large beech tree was satisfied when a Tree Preservation order was awarded to this magnificent specimen. A plot on the eastern edge of the site was bequeathed by Mrs Smith to her neighbour Eric Kearnes and this is likely to remain undeveloped for the foreseeable future. 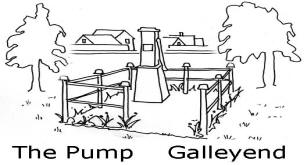