"In order to make the countryside more available to the public, especially those with disabilities and the elderly, a small area of land has been chosen as a Country Promenade. This is located in an area off Brook Lane where a seat has been installed with a small parking area. It commands beautiful views over the southern part of Galleywood and the surrounding district and is the first of its kind in the Chelmsford area. It has been made available by the Chelmsford Borough Council in consultation with the Galleywood Parish council and with the kind cooperation of local farmers.

Alongside the Promenade, the Parish Council have purchased a piece of ancient woodland called The Spinney comprising about two thirds of an acre. The mature native trees are Oak, Ash and Hornbeam with a comparatively rare Wild Service tree growing on the east edge of the pond within the woodland. Other trees include Field Maple, Elm, Hazel, Elder, Dogwood, Holly, Hawthorn and Blackthorn. Paths have been constructed to assist people in wheelchairs and parents with children in pushchairs. A 'dipping' platform is being built by the side of the pool for children who wish to learn more about pond life."

The floodlights on the games courts at the Sports Complex in Beehive Lane have brought complaints from nearby residents. The owner of a business growing flowers said that the artificial lighting conditions were affecting the growth of his plants. To comply with the conditions imposed on the original development, the lights are to be switched off when the courts are not being used.

One of the less attractive aspects of Barnard Road was removed when the Homemead Flats were demolished this year. Built around thirty years ago, they were constructed by the much criticised system-style, using pre-fabricated concrete sections. More functional than elegant, these homes were judged to be below the standard required in the 1990s. Chelmsford Borough Council's plans to move out the residents and turn over the accommodation to mature students pending a final decision was attacked by Councillor Ray Thorne, who urged that the 'Colditz' type concrete blocks be demolished without further delay. The traditional brick built homes put up in their place present an altogether more pleasing environment. 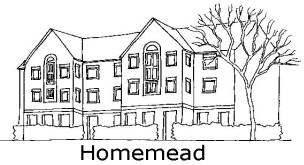